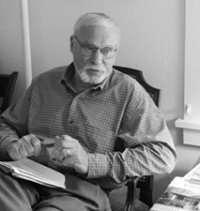 Ross K. Baker, Professor, received his B.A., M.A., and Ph.D. from the University of Pennsylvania. He was a research Associate at the Brookings Institution before joining the Rutgers faculty. Professor Baker’s fields of interest are: American Government and U.S. Legislative Politics.

He is the author of following books: “The Afro-American; “American Government” with Gerald Pomper and W. Carey McWiliams: “Friend and Foe in the U.S. Senate”(Free Press), “The New Fat Cats”(Brookings); “House and Senate”and “Strangers on a Hill”(W.W. Norton); and “Is Bipartisanship Dead?”(Paradigm) He was contributing editor to American Demographics, a member of the editorial board of Polity, and is currently a Member of the Board of Contributors of USA Today.

He served as a consultant to the Democratic caucus of the U.S. House of Representatives and senior advisor to Senators Patrick J. Leahy [D-VT] and Chuck Hagel [R-NE]. In 2008, 2012, he was Scholar in Residence in the Office of the Democratic Leader of the U.S. Senate and will serve in that capacity against in 2016.

He is a member of the Board of Contributors of USA Today and a frequent commentator on the national Public Radio Programs All Things Considered, Morning Edition, Weekend Edition, and Marketplace. In 2008 and 2012 he was Scholar-in-Residence in the Office of the Majority Leader of the United States Senate.

790:104 Introduction to American Government
790:304 Congressional Politics
790:395 Seminar on the Politics of Occupation in WWII